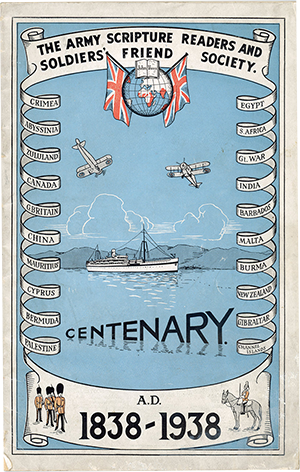 To detail exactly how the work of SASRA came into existence is not easy.

Through the fog of time records have disappeared and memories have faded, so to give an exact account of how and when and who initiated the work is not possible. To begin with, the establishment of the Society needs to be seen against the backdrop of the evangelical awakening of the 18th century. The preaching of George Whitfield and John Wesley and others influenced thousands, crossed the social barriers and gave a desire to many, rich and poor, to see the Gospel of Jesus Christ proclaimed throughout the land and across the seas.

What we do know is that around 1818 there was a certain Sergeant Rudd stationed with the Royal Artillery at Woolwich. Wishing to benefit the spiritual awareness of his comrades he put a card in the garrison guardroom offering to loan a bible to anyone who wished to have it. However, this had been done without permission and as such Rudd was reprimanded by his commanding officer and threatened with an overseas posting. But one Captain Maitland, also stationed at Woolwich, heard about the incident. He was encouraged by Rudd’s actions and he had a bible placed in every guardroom around the garrison at his own expense. This was also disapproved of by the commanding officer and the Bibles were removed.

However, Captain Maitland’s father was a highly placed and influential officer and on hearing his son’s complaint took it up with a higher authority. The outcome being that a wagonload of Bibles was dispatched to Woolwich with the orders that they were to be placed in every guardroom and throughout the hospital at the garrison.

This event probably influenced the thinking of those in authority about the spiritual welfare of soldiers.

In 1825, Kings Regulations authorised the issue, at public expense, of a Bible and Prayer Book to all who desired to have them whilst they were in service. In 1844 the order was amended allowing the Bible and Prayer Books to be retained by individual soldiers on discharge.

In the early part of the 19th Century there is plenty of activity nationally in the proclamation of the Gospel, some of it carried out alongside welfare work for the less fortunate and socially deprived. Much of the time this work being the initiative of lay men and women supported and encouraged by the churches of the denominations they belonged to.

The earliest known mention of a ‘Soldiers’ Friend Society’ is recorded in the ‘Methodist Magazine’ of 1828:

“British & Foreign Seamen’s & Soldiers Friend Society. Report of Annual Meeting , May 15th at the City of London Tavern. The Right Hon. Viscount Mandeville in the Chair. RESOLUTION PASSED—That the Sailors, Soldiers and Watermen of Great Britain present to the benevolent mind a most extensive sphere of Christian philanthropy, and demand the increased exertions of the British public to meet their spiritual necessities.”

Another early reference is to be found in The Christian’s Penny Magazine 1832. It relates to the work of ‘The Soldiers Friend Society’. Formed at Westminster, for the promoting of knowledge of religion in the British Army.

The first definite reference of the organisation we know today as SASRA is from the 7th Annual Report of The Soldiers Friend Society 1845, becoming known as The Soldiers Friend and Army Scripture Readers Society by the end of the Crimean War, so dating the work back to 1838. It does seem certain though that the work began earlier than this and of course other Christian agencies had their own agendas for mission to those in the armed forces.

The objects of the Soldiers’ Friend Society as originally constituted were, briefly—the propagation of the Gospel throughout the army by the distribution of tracts and devotional books; the establishment of Reading Rooms and Libraries; and prayer meetings amongst the men, both inside and outside barracks; without in any way interfering with the denominational liberty of the troops, in fact, the sole object was “to bring our soldiers to a saving knowledge of Christ.”

In 1856 the British Army Scripture Readers Society was formed under a War Office Charter.

There being some lack of confidence in the management of the old society a new one was established under the authority of the Chaplain General and so more directly responsible to the chaplains and therefore at this time more Anglican. In 1859 the differences between the two organisations were settled as they both had the same aims and they became The United British Army Scripture readers and Soldiers Friend Society.

In 1864 the title was abbreviated for the sake of convenience and the organisation became known as The Army Scripture Readers & Soldiers’ Friend Society.

In 1913 King George V graciously agreed to be Parton of the Society and from then on to date SASRA has enjoyed Royal Patronage. 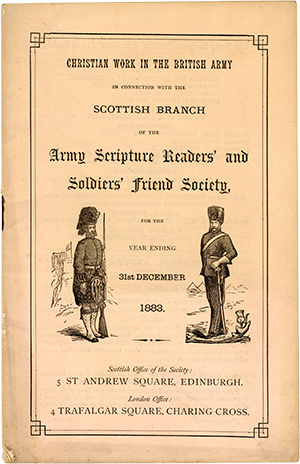 The work of the Soldiers Christian Association dates back to the evangelistic meetings of D. L. Moody at Exeter Hall when he asked a Miss Deacon, one of his team of helpers, to sit amongst the soldiers who were attending and so began an interest not only in bringing the Gospel of Jesus Christ to Soldiers but with an emphasis on supporting and encouraging them in their walk with Jesus through prayer and fellowship and bible study and instruction. 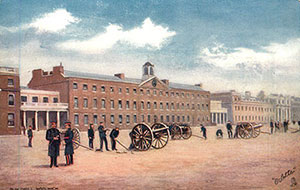 In 1887 the official inauguration of the SCA takes place as by then there were already groups forming in different garrison towns across the UK and further afield. These became the ‘Branches’ of the SCA. Many were connected to ‘Soldiers Homes’, such as Miss Daniell’s, Miss Perk’s. Miss Sandes and those denominational homes set up by the Anglican, Methodist, Baptist and other churches.

Since 1950, the organisation has been known as SASRA (The Soldiers’ and Airmen’s Scripture Readers Association) and continues the work of mission to the serving personnel of the British Army and the Royal Air Force, and the support of Christians therein.